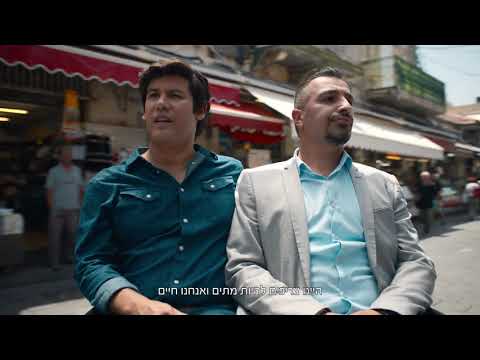 Steve and Chuma are a pair of shylocks in the organized crime syndicate of Kaslasi in Jerusalem. Our story begins in Mahne Yehuda market in Jerusalem during their rounds of “protection” collection.
Their rounds end in a known restaurant in the city. During their meal, while they are both in the restroom, there is a deafening boom from inside the restaurant.
They step out of the restroom and are horrified to find that they are the only survivors in deadly suicide bombing.
They flee the restaurant, collection bag in tow, and head to the Wailing Wall to say “ Ha-Gomel”.
Chuma is convinced that the fact they are the only survivors is a sign from god.
Chuma ruptured his ear drum in the blast, and as Steve looks for a way to communicate with him, he grabs a note from the Wall and writes Chuma : “We need to go to Kaslasi and quit”.
They reach Kaslasi and Steve tells him that they quit and (to Chumas surprise) that the collection money was lost in the bombing. Seeing the state the two are in, Kaslasi doesn’t let them quit but gives the permission to take an unpaid leave from work.
Outside of Kaslasi’s, Chuma confronts Steve. Again Steve looks for something to write on and finds the note (that he took from the Wall) in his pocket.
As Chuma realizes that Steve stole someone else’s prayer he gets angry at tells Steve that now because of them, this person won’t get his wish from God. Steve goes over the note and tells Chuma: “This isn’t a big deal; we can fulfil this man’s prayer”.
Suddenly Chumas hearing returns. He looks at Steve in awe and decides that it must be a sign from God that they should fulfil notes from the Wall (because while Steve was rambling bullshit he heard nothing and as Steve offered to fulfil a random man’s note his hearing miraculously returned).
From that moment on; these two (former) shylocks become flesh and blood angels, stealing notes from the Wailing Wall and fulfilling people’s prayers in their own unique way. Along the way they find themselves dealing with their own secrets, prayers and wishes.
And just as their secrets are revealed and confrontation reaches its peak, a bigger problem arises: Kaslasi finds out his money didn’t burn and comes after them.